A search for the term "skydiving" on the newspaper archive website Newspapers.com yields just 68 hits for the year 1956 - the same year William C. Adams bought the initial 38 acres in Hillsborough and East Amwell Townships to develop a small airport to be known as Adams Air Park. By 1967 - the year Adams sold the property - that same search delivers a whopping 4,712 results!
It is not known if the 36-year-old former fighter pilot and New York native had parachutists in mind when he laid out the runway and had an artificial lake dug at the foot of the Sourlands south of Wertsville Road - but the sporting daredevils eventually found him.
In its first few years of operation, Adams Air Park seems to have catered to recreational fliers/airplane enthusiasts. World War II veteran Adams - who after the war was a professor at Horace Mann School for Boys - hosted Civil Air Patrol cadets at the airfield in October 1957 for an overnight campout including training and rescue missions.
International competition in the sport of skydiving had been taking place since the mid-1950s but the adrenaline-inducing sport didn't take off as a recreational activity in the United States until the early 60s. Excitement for the sport spawned a popular 1961-63 television series called Ripcord - and even led to a plotline in a Frankie and Annette "beach movie" - 1965's Beach Blanket Bingo. 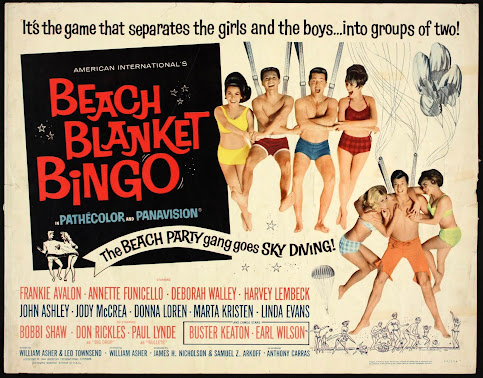 West Point graduate Captain George Gividen  - a paratrooper who lost his left leg to a grenade while serving in Korea - began skydiving on the weekends after he retired from the Army in 1960. Before long he formed the Tri-State Skydivers and began operating the Tri-State Parachute Center out of Adams Air Park.
Between 1961 and 1965 skydiving competitions and exhibitions were regular features at Adams Air Park. Tri-State boasted 218 members in 1962 - eighteen of which were women. It wasn't always fun. Local newspapers regularly featured headlines such as "'Chutist Plummets 7,200 Feet, Lives", and "Chute Fails, Skydiver Hurt". During a Civil Defense exercise in 1962, a parachutist drifted off course and landed in a Hillsborough farmer's field. He was fined $10 for trespassing!

A June 1963 competition which attracted 200 contestants was said to be the largest US skydiving meet up to that time. An exhibition by the US women's parachute team that August featured a stunt where the women unfastened their parachutes while still airborne and dropped into the lake below.

The airport - including what then amounted to 352 acres of land - was sold by Adams in 1967. In the years that followed the property was used for various other purposes such as horse shows, and for a time the lakefront was a well-known illicit nude beach!
On October 26, 2020, the New Jersey Conservation Foundation purchased the property and added it to adjoining land in Somerset and Hunterdon Counties to create a 1,150-acre nature preserve.
Posted by Greg Gillette at 10:02 PM