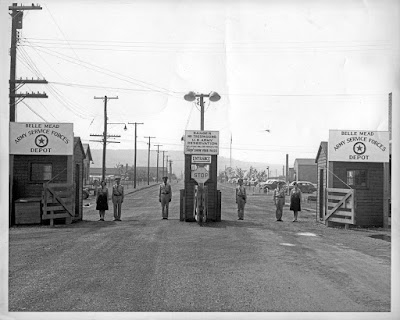 On January 29, 1941, The Hopewell Herald reported that residents and farmers in the vicinity of Belle Mead, NJ had been approached by two real estate agents looking to potentially buy thousands of acres of land adjacent to the Sourland Mountain in Hillsborough Township. Although the agents did not disclose where they were from, the implication was that the land was being sought by the federal government. With war raging in Europe, it was the consensus of the property owners that they would have no problem at all selling their land for the purpose of “National Defense”. 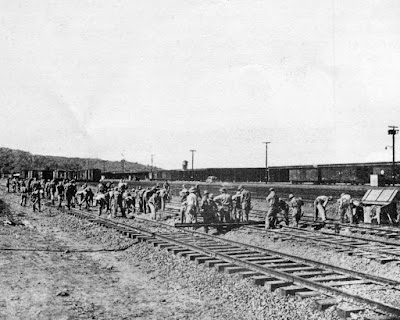 The land having been acquired, construction began on 28 April 1942, with newspapers reporting hundreds of workers erecting warehouse buildings and constructing miles of railroad sidings on the 1,000 acre site.

One of the people that answered the call for “Immediate War Work for Laborers” was future writer and social activist James Baldwin. In June 1942, not yet eighteen, he moved from Harlem and roomed with a friend who had also taken at a job in Belle Mead and was living with friends in Rocky Hill. They made very good money for the time - $80 per week plus overtime. Baldwin started out in railroad construction, but the heavy labor proved too much, and he was transferred to warehouse duty.

In his book “Notes of a Native Son”, he writes powerfully about the subtle and not so subtle racism he experienced during the one year he worked at the Depot, culminating in a scene that played out on his last night in New Jersey. Baldwin and some friends went to see a movie in Trenton, but were refused service at a local diner. An infuriated Baldwin walked to the fanciest restaurant in the vicinity, demanded service, and, when refused, threw a glass water pitcher shattering the mirror behind the bar. This was the signature moment that set Baldwin on a four decade crusade for social justice.

West Point graduate Colonel R. Potter Campbell was assigned as the first Commanding Officer on 18 July 1942. During this period the Depot went through many name changes: Bound Brook Defense Aid Depot, Bound Brook Holding and Reconsignment Point, Bound Brook War Aid Depot, Belle Mead Quartermaster Depot, and finally, on 27 May 1943, Belle Mead Army Service Forces Depot – by which name it was known throughout the war and up until the time it was acquired by the General Services Administration.

The civilian workers were the heroes of the Belle Mead Depot. Not only did they build the facility, they were employed in the near entirety of its operation, with military personnel providing supervision. As most able-bodied men began to be drafted or enlist in the service following the December 7, 1941 attack on Pearl Harbor, the Depot employed more women in all areas of operations, including guard duty, as shown below.

On December 6, 1942, The New York Times reported that because of a severe labor shortage due to men being sent overseas as many as 350 Princeton University students – and their professors – were now working at the Depot warehouses on Sundays. 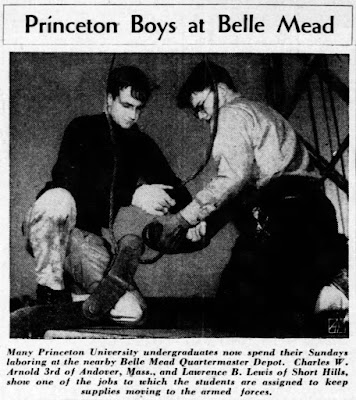 On August 10, 1943, the Depot held its first anniversary celebration with distinguished military officers from around the country traveling to Belle Mead for the occasion. The festivities included a parade by the military personnel, the civilian guards and their dogs, and the guard band. 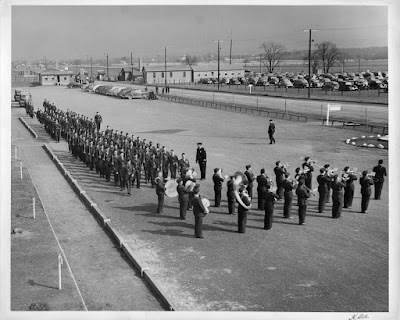 New Jersey Governor Charles Edison addressed the assembled and commended them on their exemplary work and vital contribution to the war effort. 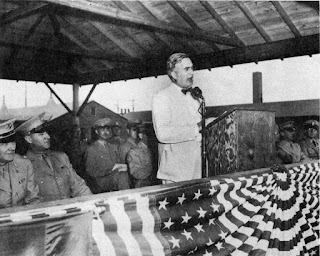 Within a month of the anniversary celebration, Colonel Potter was again faced with a shortage of civilian employees. With men constantly being taken away for military service, he pleaded with his superiors in the Quartermaster Corps for relief. They sent him a provisional battalion of 800 African American soldiers – raw recruits, some with only 2 weeks of military service. While civilian employees lived off-base, these soldiers needed to be housed and fed at the Depot. This necessitated the construction of an enormous tent city on the base as seen in the image below.

At a time when segregation was the norm in many parts of the country, Colonel Potter not only had to deal with integration of the African American troops into the mostly white labor force, but also ease the natural friction between the huge influx of military personnel and the 1,700 remaining civilian employees. He did this by having everyone, civilian and military, black and white, work side by side in all of the labor-intensive functions of the Depot, and by encouraging the provisional battalion to participate in all of the recreational activities, including the renowned glee club, led by Irving Washington of East Orange, NJ. 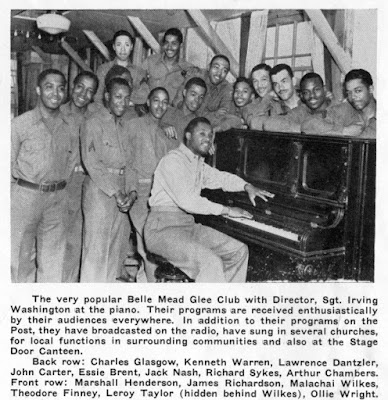 At the end of May 1944, on Colonel Potter’s last day as Commanding Officer – and just a week before D-Day – the press was allowed access to the Depot for the first time. 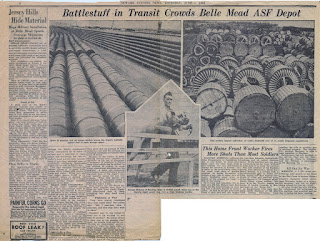 Reporters were wowed by the $1.2 billion (over $16 billion today) in war supplies, the 45 miles of railroad track, 5 locomotives, 550 freight cars, 14 giant warehouses, and 7 million square feet of indoor and outdoor storage space. Cranes, heavy trucks, bridges, portable buildings, complete manufacturing plants, spare parts, tools, rifles and ordinance, petroleum products – 5,000 tons of equipment were moved in and out of the Depot on a daily basis.

Captain Staniar, in charge of the outside storage areas, showed off “the largest concentration of cable in the world, 53,000,000 feet of it”! 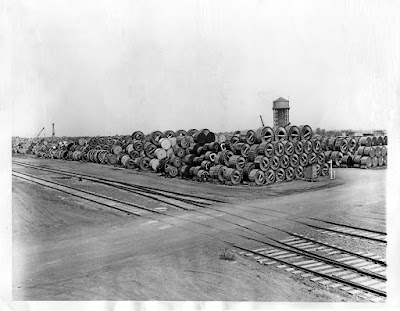 The timing of the press tour could not have been coincidental. Like a prize fighter at the pre-bout weigh-in, our adversaries overseas must have been seriously intimidated and demoralized by this amazing show of material strength. 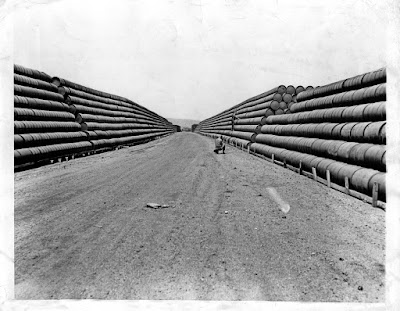 On June 21, 1944, The Hopewell Herald reported that Italian Service Units had replaced the QM Provisional Battalion. The newspaper correctly reported that these men were former prisoners of war who had been captured in North Africa and Sicily, and had volunteered to work for the U.S. They were allowed visits by family members living in America, and other privileges such as “spaghetti, cheese, and other foods” to supplement their military rations. 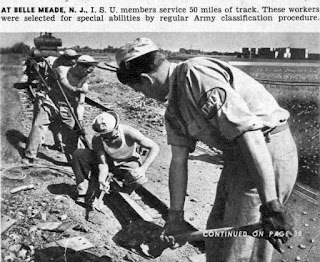 Italian Service Units worked at the Depot in skilled and unskilled positions until October 29, 1945 when they were replaced by German prisoners of war. Unlike the Italians, these POWs were not afforded any luxuries, and were kept under strict guard. A reward of $15 was offered for apprehension of an escaped prisoner, who could be recognized by the letters PW emblazoned on the back and sleeves of shirts, and on the seat and legs of the trousers.

By the end of 1946, the army was using the Depot to dispose of military surplus. Veterans were given the first shot at buying items such as farm equipment, office equipment, household items, hardware, and clothing – even jeeps. 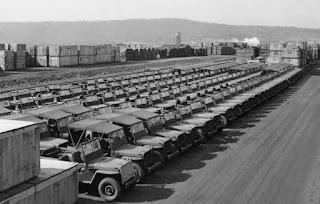 The Belle Mead ASF Depot saw renewed operations during the Korean War, but nothing like the intense activity from 1942 through 1945.

In 1958, 800 acres of the property was acquired by the General Services Administration, who operated the Depot until 1991. Subsequently the property was sold in two portions, with the Somerset County Improvement Authority purchasing the acreage that is now being developed as a county park.

In October of 2014, the Somerset County Park Commission, together with local officials, held a ground-breaking ceremony for Mountain View Park.

Although there are very few, if any, physical structures remaining at the Belle Mead Depot, that doesn’t mean there aren’t still opportunities for Somerset County and Hillsborough Township to commemorate the role the Depot and it’s civilian workforce played in defeating fascism by winning World War II.
Posted by Greg Gillette at 8:00 AM