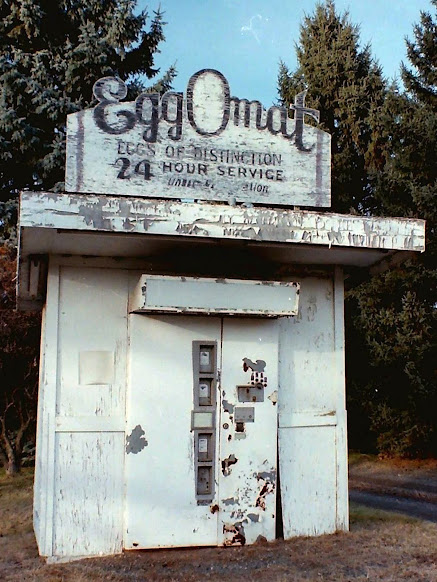 Today, if the Somerville Poultry Farm is remembered at all, it is for its much-loved roadside Egg-O-Mat vending machine, like the one pictured above. But for Hillsborough residents who lived and worked near New Jersey's largest poultry operation in the 1950s and 1960s, the jogging of memories might better stir up the sentiment expressed in the newspaper headline below.

In the decades before 200,000 laying hens came to Hillsborough, the 100-acre plus property on Route 206 - site of the present-day Hillsborough Promenade - was the Seven Elm Farm. It was operated for twenty-five years by Socrates and Emily Yeomans and included the historic Abraham C. Whitenack residence.

After the farm was used as a private airfield during World War II, the widowed Mrs. Yeomans signed a contract with a developer to turn the farm into a commercial airport. Hillsborough Township officials opposed the airport and promptly changed the zoning to residential/agriculture. This led to court battles - ultimately lost - which consumed most of the rest of Emily Yeomans' life. With what lay ahead, the township might have wished for the airport instead.
The Somerville Poultry Farm moved to the property in 1954 and soon had 60,000 chickens in residence. As eggs aren't the only thing that comes out of a chicken, the problems with odor began almost immediately.

Falcon Road residents were the first to complain. As can be seen in the aerial view, the farm was right in their backyards.
The inefficient removal of the chickens' waste led to the second noxious concern - flies. Area residents were overwhelmed for years by swarms of flies so great that they couldn't let their children play outside. Spraying at the farm gave some relief, but the flies came back again and again.
By 1960 the farm had increased its output by growing the brood to 150,000 layers producing 100,000 eggs a day. This was no family farm. In fact, was it a farm at all? That was the question debated at the township committee meetings, where at least one committeeman, Robert Conard - a farmer himself -suggested that this was no farm at all, but rather a commercial establishment, and should be regulated as such.
Organized opposition began in 1961 and continued through the decade as the farm grew to 200,000 chickens and included satellite operations on Triangle Road and in South Branch. Each summer as warmer weather set in residents appeared before the Board of Health or the Township Committee to complain about the smell and the flies. By the mid-60s they added dead rats to their list - as the extermination program carried out at the farm did not require poisoned rats to actually die on the property.
Considering its fifteen years of somewhat notorious operations, the Somerville Poultry Farm quietly went out of business in January 1969 and almost immediately demolished all of the buildings save the historic Whitenack house.
Posted by Greg Gillette at 5:35 PM