Hillsborough Township, NJ might not be an island, but you wouldn't be able to tell that from the abundance of bridges required for autoists to escape the city limits. Bridges in Somerset County were mostly made of timber and stone until the first iron bridge was installed at Weston in 1872. Hillsborough's four - technically five - remaining iron road bridges were built between 1886 and 1902.

On November 17, 1886, the Somerset County Freeholders accepted the Nevius Street Bridge as complete from the Wrought Iron Bridge Company of Canton, Ohio.   According to the National Register of Historic Places nomination form, Somerset County's oldest remaining iron bridge is a "two-span, 10-panel, double-intersection Pratt. pin-connected, through-truss bridge of either steel or iron approximately 300 feet long, 18 feet wide, and 23 feet high."
The iron bridge replaced an earlier wooden bridge spanning the Raritan River between Raritan Boro and Hillsborough that dated from 1846. Motorists who remember faring for the safety of their side-view mirrors before the bridge was designated as one lane can blame local residents who petitioned for a last-minute change to the design increasing the width from 16 to 18 feet! A width of 16 feet would have pretty much eliminated any possibility of two-direction travel in the modern era.

Bridges two and three of our survey carry Higginsville Road across the South Branch of the Raritan River - both the main channel and a smaller channel that served as a mill race - in the Hillsborough Township village of Higginsville. The two bridges are similar in that each is of a Pratt metal through-truss design and they are each 100 feet long, 16 feet wide - but they are from different manufacturers and constructed on different dates.

The bridge over the main channel, constructed in 1890, is a rare surviving example of a bridge by Milliken Brothers of Brooklyn, New York. Somerset County originally contended that because the river had two channels in this location, the bridge over the main channel was wholly the responsibility of Hunterdon County. It took a judge to decide that both channels of the South Branch - because they never were more than 500 feet apart - constituted one waterway and that both counties were responsible for both bridges. 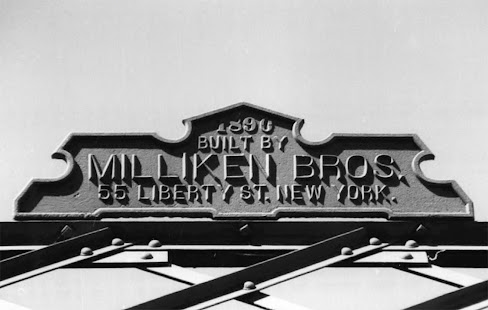 In 1893 the Freeholders of both counties met to discuss what to do about the deteriorating 88-foot wooden bridge spanning the minor channel. After some resistance from the Somerset delegation, it was agreed to construct another 100-foot long, 16-foot wide Pratt through-truss bridge as a replacement. The contract was awarded to the Wrought Iron Bridge Company of Canton, Ohio - a company that had already built several other bridges in Somerset County including in North Plainfield, Somerville, Rocky Hill, and Raritan Boro. The only one of these bridges which survive today, besides the Higginsville Bridge,  is the Nevius Street Bridge described above.

One of the most recognizable bridges in Hillsborough is one of the six structures that constitute the Neshanic Mills Historic District - the Elm Street Bridge. Unlike Hillsborough's other iron bridges, the Elm Street Bridge is not a Pratt through-truss bridge but rather a lenticular truss bridge.
After a devastating 1896 flood destroyed nearly every bridge on the South Branch and the main stem of the Raritan River between Neshanic and Bound Brook in 1896, Somerset County Freeholders had their hands full. The contract for the Elm Street Bridge was awarded to the Berlin Iron Bridge Company of East Berlin, Connecticut. Each of the two spans of the bridge is 140 feet long, and the roadway is seventeen and a half feet in width.

Our final bridge carries Woodfern Road over the South Branch of the Raritan River from Hillsborough to Branchburg. Like most of the others, it is a two-span Pratt through-truss bridge with an earth-filled stone pier in the middle.
The bridge was constructing by J.W. Scott of Flemington in 1902 and is 187 feet long with a roadway width of 15.4 feet. This early 20th-century bridge was rehabilitated most recently in the 21st century and looks great today.
Posted by Greg Gillette at 9:58 PM