Duke Farms Bronzes, Then and Now

A small blurb in the May 3, 1902, issue of the New York Tribune contained the news that 200 pieces of bronze statuary - three railroad cars full - had just arrived at the James B. Duke estate in Hillsborough. The pieces included vases, allegorical figures, many animals, and an $80,000 ($2.5 million today) fountain of marble and bronze.
The statues were chosen by Duke when he visited the du Val d'Osne foundry in Paris that winter. In a full-page story four months later the Herald declared them to be "The Most Imposing Private Collection of Bronzes in America".
This was the year that Duke first fully committed to turning his estate into a magnificent public park, and he spared no expense. Many of the animal figures were placed in the woods that used to be near the coach barn. Visitors, accustomed to the crude cast iron statues they might see at a municipal park or ordinary private home, marveled at the beauty of the bronzes. More than one person was reported to be startled at the sight of deer in the trees, or a hunter with his dogs.


Allegorical figures such as the four graces were placed on the lawn near the conservatory - today's Orchid Range.
Today, most of the bronzes are long gone - auctioned off in just the last 15 years, although many were removed from the grounds decades ago. Those that remain have appeared in this series - Lo Spinario, The Farnese Bull, The Urchins' Band - and I have also written about a few that are no more - Flying Mercury, The Sower, The McKinley Bronze. Still, taken altogether, this only accounts for a handful of the many dozens of bronze statues that once adorned the Duke's Park. 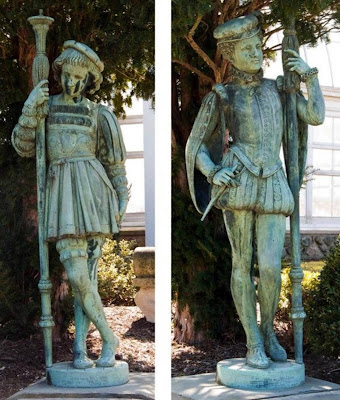 Most of Duke's bronzes - including the pair of torchieres above that used to stand in front of the Orchid Range, and the dogs below - were auctioned in 2009 and can be found in the usual locations such as Pinterest. 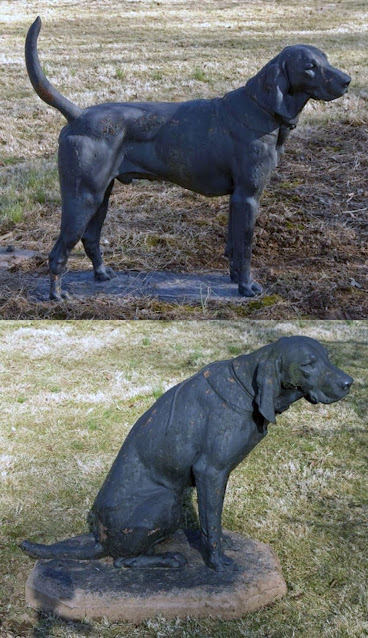 And if you peer keenly into the thicket of the Internet, you just may find the image to complete your Then and Now post! 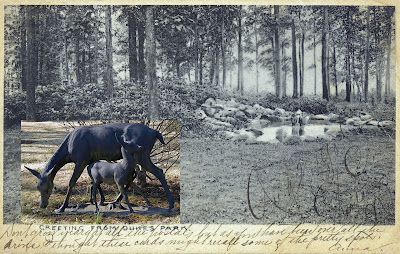 Posted by Greg Gillette at 9:59 PM

Email ThisBlogThis!Share to TwitterShare to FacebookShare to Pinterest
Labels: Then and Now