A few weeks after the Belle Mead Army Service Forces Depot opened in August 1942, the Army officially announced that a second depot in Hillsborough was "rapidly nearing completion". This facility was located in the South Somerville section of the township and was officially known as the Somerville Quartermaster Sub Depot.
The depot was not an adjunct of the Belle Mead depot but rather was connected with the Jersey City Quartermaster Depot. The depot was located west of Route 206 just south of the Doris Duke estate. 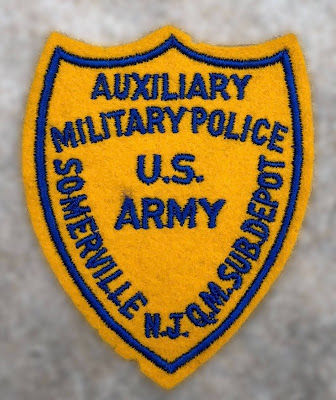 Unlike the Belle Mead Depot which dealt with heavy machinery, petroleum, cables, trucks, etc., the Somerville Depot was the transit point for other types of items needed by Army posts stateside or destined for the war in Europe. In 1943 alone, $500 million of food, canned fruit, stationery, furniture, chemicals, laundry supplies, and other miscellaneous items arrived by railcar and were sorted, stored, and eventually sent to the New Jersey ports.
Colonel George F. Spann - the commanding officer of the Jersey City Quartermaster Depot in 1943 - described what made the sub depot a success: "Systematic warehousing and shipping here at Somerville is possible only through the cooperation of the civilian men and women workers and the small group of officers at the station."
As the war in Europe and the Pacific raged on, able-bodied men were continually being called up for service putting a tremendous strain on the depot's workforce. Bankers, merchants, lawyers, and others not directly employed in the war effort all put in a few hours of work each evening after their day jobs. Somerville High School students - including many boys from Hillsborough - worked on weekends and school holidays with teachers as their foremen.

The depot made the national news in October 1944 when it was discovered that area locals had been scavenging the refuse pits at the depot and had reclaimed hundreds if not thousands of tins of canned food that the army had disposed of because it was "unfit for human consumption". The scavengers proclaimed the cans of meat and vegetable hash, grapefruit juice, tomatoes, cherries, pumpkin, corned beef, and Vienna sausage to be just fine. One woman who lived near the depot said that she had four children to feed, and had been visiting the pits for four months!
In 1947, with the war over, the 325-acre depot was conveyed to the Veterans Administration. Since then, the property has been divided many times and used for many purposes: the US Postal Service, Somerset County, an industrial park, and even Hillsborough Township Parks and Recreation have each inhabited a portion of the depot.
Posted by Greg Gillette at 9:35 PM