Hillsborough Celebrates its Bicentennial, May 1971

Hillsborough, New Jersey received its royal charter on May 31, 1771. Two hundred years later, the township residents came together came together to celebrate their bicentennial. 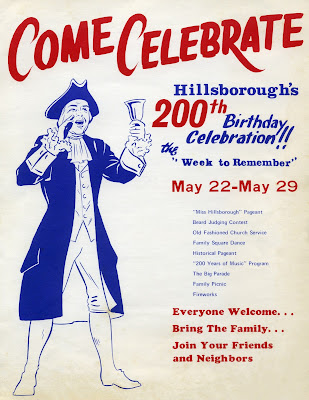 The week-long celebration began on May 22, 1971 with the "Miss Hillsborough" Pageant and Beard Judging events at the high school.
On Sunday evening May 23, residents were invited to an old fashioned church service at the historic Neshanic Dutch Reformed Church. 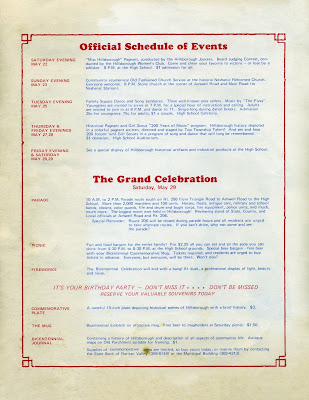 The activities continued on Tuesday with a Family Square Dance and Song Jamboree at the high school cafeteria. On Thursday and Friday evenings a history pageant and Girl Scout song and dance show were featured at the high school auditorium.
And finally, on Saturday May 29th, the event everyone was waiting for - the parade! Touted as the biggest event ever held in Hillsborough up to that time (it wasn't, the John Basilone post-parade rally in September 1943 at Duke Farms drew 20,000) the parade went right down Route 206 from Triangle Road to Amwell Road.
One hundred units marched, including The American Legion Color Guard, the U.S. Air Force Band, the U.S. Army Marching Unit, and the Polish Falcon Cadets, among many others. The parade featured colorful and creative floats of all kinds - The Hillsborough CYO's float featured a huge cake with 200 candles, the Somerville Borough Council had a replica of the court house, and the Hillsborugh Dukes had a float with a 12-foot-high football player named "Charlie". Besides the Polish Falcon Cadets and Air Force Band, musical entertainment was also provided by the marching bands of Montgomery, Piscataway, and of course Hillsborough.

The Parade was followed by a picnic at the high school (all you can eat for $2.25) and fireworks after dark. Commemorative items for sale included a decorative plate featuring historic scenes, a mug with the Bicentennial Emblem, and the Bicentennial Journal containing a concise history of Hillsborough.
Posted by Greg Gillette at 9:59 PM