I needed to have an MRI right away. This was about five years ago, just days before surgery to repair an exploded vertebral disk in my lower back. Yes - exploded! Apparently, the disks are really little sacks of goo - and if they burst, the goo can go everywhere. That is what happened to me, but i didn't know it yet. All I knew was that I had been in pain for weeks, and the insurance-mandated physical therapy was only making things worse!

I made an appointment at Hillsborough Radiology on Route 206. This wasn't the first time that I had had a Magnetic Resonance Imaging test - I had one about 10 years earlier. Although I remembered it was quite unpleasant, especially because they had forgotten to put the air on and I was sweating profusely, I got through it fine. So I wasn't at all expecting what happened 10 years later.

Everyone at Hillsborough Radiology was very nice, and all was going smoothly as I was sucked into the machine for the series of scans. Then it happened - I had a full blown panic attack in the machine. Heart racing, chest pounding, cold sweat from head to toe - very scary, and something that, once you have one, you know you never want to have again.

They pulled me out, and I was fine. I actually returned the next day and completed the series of scans on their other machine, which has more of an open feel to it.

Last week, I needed to have an MRI again. My insurance no longer covers Hillsborough Radiology, but does cover University Radiology, located in the office building on the southeast corner of Route 206 and Raider Boulevard.

There is no telling what will set off a panic attack. It is a completely automatic response, and isn't at all rational. But having said that - I somehow knew I couldn't have a scan done at University Radiology.

I found Roseland Imaging in Franklin Township. They have an open-style MRI machine, which is what I was looking for. I was rationalizing that it was the closed-in feeling that had set off the panic attack five years earlier. Actually, I was hoping it was - but who knows! The technician who did the scan took all the time I needed to get started, and obviously was used to catering to anxious patients.

He understood that it wasn't any fear of the machine or the procedure that was causing my anxiety - it was the fear that I would have another panic attack! He was very reassuring - in fact, the procedure could be stopped any time if i felt uncomfortable.

In the event, I sped right through the entire series of scans, never felt uncomfortable, and it was all over in about twenty minutes. 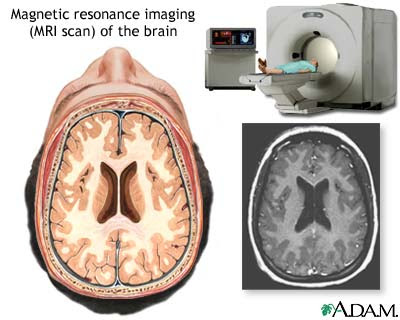 By the way, though my wife may argue this point, my brain turned out to be normal - just like the one in the picture!
Posted by Greg Gillette at 12:01 AM