Wild Man on the Loose

Did you hear that? Is someone at the door? How about on the deck, or in the yard? Maybe it was a deer or just the wind - or maybe it was a Wild Man! 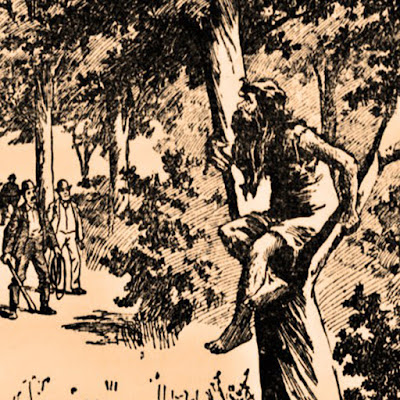 In the summer of 1897, Somerset County was terrorized by its very own Wild Man. During a three week period from the end of June to mid-July, residents reported seeing a "wild man" in their fields and near their homes. He appeared in tattered clothing with no hat and no shoes - and he didn't hesitate to attack any and all that approached him!


The Wild Man was later identified as Emil Funger of Scotch Plains. Emil and his wife were hard-working German immigrants who got along well with each other and the community - until Emil's mind started to go.

On the morning of Sunday, June 20 he took a heavy walking stick and headed out into his fields. He never looked back and did not return that evening. Mrs. Funger was worried that some tragedy had befallen him after he did not return the next day or the next.


Apparently, Emil spent the next three weeks living in the fields of Somerset County, eating herbs and berries, and terrorizing all that came in contact with him.

Mr. Funger returned to his homestead the evening of July 13 - but did not acknowledge his wife or pay any attention to her. The next day he went about his regular chores - working as if he was a hired hand!


Funger's wife, friends, and co-workers indulged him in the hope that he would eventually snap out of it. Whether he did or not is a mystery to us today. The Fungers moved to Mountainside, and Emil died in 1925.
Posted by Greg Gillette at 10:31 PM